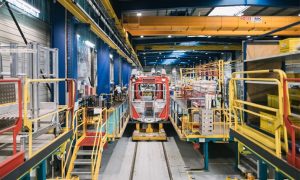 During the first half of fiscal year 2020/21, Alstom recorded a decrease in orders and sales due to Covid-19 pandemic. The backlog amounted to EUR 40 billion on 30 September 2020, providing strong visibility on future sales. The book-to-bill ratio stood at 0.8, reflecting the impact of the Covid-19 crisis.

Company’s orders organically decreased by 42%, from EUR 4.6 billion to EUR 2.65 billion. Alstom says that the decrease was expected as a consequence of the shift in tendering activity from the first half towards the second half in the Covid-19 context.

Alstom was awarded projects mainly for rolling stock and services, including orders for the Nantes tramway in France, rolling stock and maintenance follow-on orders of currently active projects in AMECA, and the renewal of a full maintenance contract in Mexico. Alstom also booked a metro system contract in Taipei (Taiwan), a new-generation digital interlocking project in France, and signalling and infrastructure order as part of a modernisation project in Romania.

Between 1 April 2020 and 30 September, Alstom’s total sales reached EUR 3.5 billion, down 13% organically. This decrease is also a consequence of the Covid-19 crisis, in particular during the lockdown period in Q1 when some of its production units and suppliers had to slow down temporarily operations.

Operations in Q2 were back to a normal level with sales of EUR 2 billion, up from EUR 1.5 billion in Q1.

In H1 2020/21, rolling stock sales reached EUR 1.7 billion, a 8% organic decrease, as sales recognition was affected during the containment period, particularly in Europe. Signalling sales reached EUR 691 million also down by 2% (organic), with a moderate decline due to a shift in installation during containment followed by a recovery during the second quarter.

The services sales also recorded a 5% organic decrease reaching EUR 662 million, due to train traffic reduction during the first quarter followed by a normalization of train traffic during the second quarter and the execution of the growing service backlog.

The sales of systems sector decreased at EUR 452 million (down 42% organic) with an expected ramp-down on Dubai and Riyadh systems projects, a fully traded contract in Panama and the impact of containment measures.

Alstom delivered an adjusted EBIT of EUR 263 million corresponding to a 7.5% margin in first half 2020/21 compared to EUR 319 million corresponding to a 7.7% margin over the same period last year. This resilient adjusted EBIT margin despite the volume impact linked to the Covid-19 crisis results mainly from an increase in gross margin. The cost of sales ratio improvement was achieved through the optimisation of production capacities, enhanced industrial efficiency, and control over overhead production costs. The increased signalling and services share within the overall company sales mix also had a positive impact.

During the half of fiscal year 2020/21, Alstom reached major milestone of Bombardier Transportation acquisition project. In September, the Alstom signed the sale and purchase agreement with Bombardier Inc and Caisse de dépôt et placement du Québec for the acquisition of Bombardier Transportation. Price has been revised to consider the current context. Net proceeds are now expected up to EUR 5.3 billion against a range of EUR 5.8 – EUR 6.2 billion previously agreed. In October, an extraordinary shareholders’ meeting approved all the resolutions the transaction. The closing of the transaction is expected for Q1 2021 subject to regulatory approvals and customary closing conditions.

In June, Alstom has acquired IBRE, a company specialised in the development, manufacture and supply of cast iron or steel brake discs for high-speed, intercity, regional and suburban trains, trams and metros. With this acquisition, Alstom reinforces its internal capabilities regarding railway braking systems, which are essential to the overall dynamic performance of trains. IBRE had a turnover of approximately EUR 10 million in 2019.

Despite the Covid-19 context, Alstom preserved its innovation capabilities with a sustained level of research and development net costs at EUR 125 million, representing 3.6% of sales, in the half of fiscal year 2020/21.

During the first semester, Alstom entered into several agreements in Europe to shape the mobility of the future with hydrogen trains. The Coradia iLint hydrogen train has performed successful extensive testing phase in Groningen, in the Netherlands, obtaining the authorisation to run on the national railway network and perfectly fitting the commercial service of the current timetable.

In addition, the Coradia iLint will now demonstrate its worth in Austria over three months during which it will transport passengers on geographically challenging routes.

Alstom also plans a test project to implement Automatic Train Operation (ATO) in daily passenger operation of regional trains. The project will begin in 2021 together with the Regional Association of the greater area of Braunschweig, the German Aerospace Center (DLR) and the Technical University of Berlin (TU Berlin) and the first test of automated train operations is expected beginning 2023.