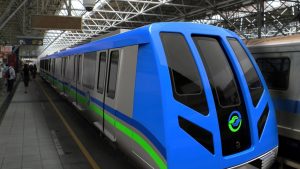 Under its EUR 248 million share of the contract, Alstom is responsible for the design, supply, manufacturing, testing and commissioning of 16 additional fully automated, four-car Metropolis trains, bringing the entire fleet to 35 four-car trains which will operate the entire new line in 2028.

Alstom will also deliver the Urbalis 400 CBTC signalling system, SCADA system, as well as platform screen doors. The trains will be manufactured at Alstom’s Taubaté factory in Brazil and the signalling system will be delivered by its Saint-Ouen site in France and Bangalore site in India

The two companies will jointly carry out project management and system integration.

As part of the second phase, Taipei Metro Line 7 extension will add 13.3 km with 13 stations to the first 9 km-long section which will be served by 9 stations.

In 2018, Systemwide E&M Project Office Department of Rapid Transit Systems of Taipei City Government (SEMPO) awarded the consortium a EUR 378 million contract for the first phase of the line.

Alstom is currently supplying a driverless signalling system for Taichung Green metro line and in 2017 won its first tramway project in Taiwan for the delivery of 15 Citadis trams.