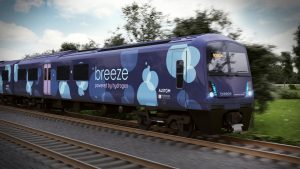 Eversholt Rail and Alstom announced a £1 million (over EUR 1 million) investment for Breeze hydrogen train development, creating an entirely new class of train, the first-ever 600 series. The first trains could be in service in 2024, replacing the regional diesel train fleets.

The investment is part of the British hydrogen train which will be ready for early deployment in the UK to meet the Government’s need to decarbonise the rail industry.

The Breeze trains will be built at Alstom’s Widnes Transport Technology Centre, in Liverpool City Region. The centre is expected to become Alstom’s worldwide centre of excellence for hydrogen conversion when this project is in series production. It will create over 200 high quality engineering jobs in the North West.

The Breeze hydrogen train is a major step towards the decarbonisation of country’s railway transport which includes the removal of diesel-powered trains.

“It’s time to jump-start the UK hydrogen revolution. This bold move to back the Government’s ambitions on hydrogen means we are the only game in town if you want a shovel ready British hydrogen train. The Breeze is good to go, wherever the Government commits to upgrading Britain’s railway with hydrogen trains,” said Nick Crossfield, Alstom Managing Director for UK & Ireland.

As Breeze will be the first UK train fleet to use the Class 6xx category, it will bear the classification ‘600’, a new train class. The 600 series will be reserved for alternative traction like hydrogen, and as the Breeze is the first of this type, it will have the first number, 600. “Eversholt Rail and Alstom are delighted with this recognition,” the companies said.

In 2019, the two companies unveiled the design of the hydrogen train that will  create a zero-emission mobility.