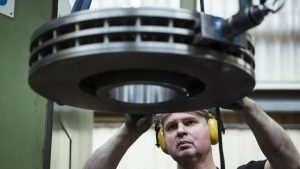 Alstom has acquired Ibre, a company specialised in the braking systems which develops and supplies cast iron or steel brake discs for rolling stock including trams and metros.  Following completion of the transaction, which took place on 30 June, the company, renamed ‘Alstom Ibre, becomes a wholly owned subsidiary of Alstom.

The two companies already had a long working relationship on projects for SNCF. Through this acquisition, Alstom will reinforce its internal capabilities regarding railway braking systems, which are essential to the overall dynamic performance of trains.

Railway brake discs are one of the critical components of the braking system. Alstom’s acquisition of Ibre represents a unique opportunity to extend its offer. Ibre products will be offered as original equipment and as part of maintenance contracts.

Ibre employs around 30 people at its Sens site in the region of Bourgogne Franche Comté, in the east of France, and had a turnover of approximately EUR 10 million in 2019.

It is a company with an international scope, with more than half of its sales in France, of both original equipment and replacements. The rest primarily serves customers in Austria, Australia, Belgium, Scandinavia, England, India and Germany.

In France, Ibre manufactured and supplied its braking systems to SNCF, RATP, ilevia, the public transport operator for the Lille Métropole, RVI – a subsidiary of Renault, and Iveco, as well as to the Ministry of Armed Forces. Abroad, the company has delivered its products in Germany, to Deutsche Bahn, in Belgium, to Brussels public transport company – STIB and in Morroco to the ONCF.

The transaction is part of AiM – ‘Alstom in Motion’ strategic plan to place Alstom as a leader in green and smart mobility solutions by 2023.

“This acquisition represents very promising development potential for Ibre and its employees and is in line with Alstom’s strategy to extend its know-how,” says Jean-Baptiste Eyméoud, Senior Vice President Alstom France.