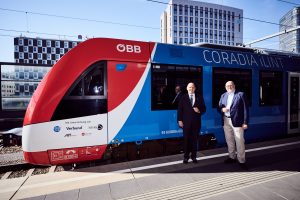 Starting 11 September until the end of November, Alstom’s Coradia iLint hydrogen train will run for the first time in regular passenger service for ÖBB.

“We clearly see ourselves as pioneers in testing hydrogen technology on rail. As the largest climate protection company in Austria, we are actively shaping the mobility of the future with technological alternatives,” Andreas Matthä, CEO of ÖBB-Holding AG said at the ceremony for the launching of the hydrogen train held in Vienna.

Following successful test operation in Northern Germany between 2018 and 2020, the Coradia iLint train will now demonstrate its worth in Austria over three months during which it will transport passengers on geographically challenging routes.

ÖBB will test the Coradia iLint on the regional railway lines in the country’s south, where they could replace diesel trains. Passengers can look forward to a low-noise train with a top speed of 140 km/h and zero emissions.

The train will run in the southern part of Lower Austria and on the railway network of the inner and outer of Aspangbahn (Vienna), as well as on the route between Wiener Neustadt and Puchberg (80 km far from Vienna) or Gutenstein.

“With its use in regular passenger operations for ÖBB, our innovation train Coradia iLint has reached the next milestone. The train’s emission-free drive technology offers a climate-friendly alternative to conventional diesel trains, especially on non-electrified lines,” Jörg Nikutta, Alstom’s CEO in Germany and Austria, said.

The operational success of Coradia iLint hydrogen train started in September 2018, when two pre-series vehicles began regular passenger service in Lower Saxony, Germany. After 1.5 years of trial operation and more than 180,000 km covered, the way was cleared for the delivery of 14 series trains beginning in 2022.

The Coradia iLint is the first passenger train in the world to run on a hydrogen fuel cell, which generates electrical energy for propulsion. This completely emission-free train is quiet and emits only steam and water.

Alstom has sold 41 of hydrogen-powered trains in Germany. Other countries such as the United Kingdom, the Netherlands, France and Italy are also interested in the technology.