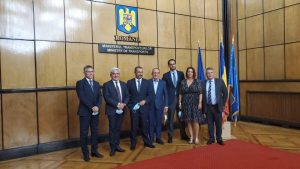 The Romanian railway infrastructure manager, CFR SA, and the Asocierea RailWorks consortium signed the contract for the modernisation of Lot 2 Apata-Cata section part of Sighisoara-Brasov line situated on the Rhine-Danube Corridor. The project is expected to be completed within four years.

In December 2019, the consortium was announced as the winner of the tender with a submitted offer of RON 2.72 billion (EUR 556.87 million).

RON 2.86 billion (EUR 585.53 million) was the estimated value of the contract without VTA of which the European Commission through the CEF covered 82% while the remaining sum is covered by the state budget. EUR 455.28 million was the total eligible cost of the project, of which Romania has received EUR 372.14 million under the 2015 CEF Transport call.

This project completes the previous one for Lots 1 and 3 of the same section, which was awarded to Asocierea RailWorks in March 2020. In total, Alstom will provide signalling and electrification works on the double line covering the railway distance of 128 km, totalling more than 250 km of modernised railway infrastructure between Sighisoara and Brasov, two important touristic destinations in Romania.

“Alstom has now reinforced its leading position on the Romanian railway market, for both digital train control and electrification. Covering the entire subsection between Sighisoara and Brasov will provide a smooth and effective operation, ensuring a consistency in the quality of service and coordinated efforts to complete the entire subsection on time and budget,” Gabriel Stanciu, Alstom Managing Director for Romania, Bulgaria and the Republic of Moldova, said.

The new project, totalling 28 km of double railway line, includes the optimisation of the existing route by building tunnels to reduce travel time, as well as the modernisation of most of the old line, for passenger trains operating at up to 160 km/h.

The most complex part in this project is the construction of two double tunnels, four tunnels in total, with two per each direction, totalling almost 13 km of double lines. In these tunnels, Alstom is responsible for an electro-ventilation system to compensate the lack of natural ventilation, along with a fire-proof system to ensure full traffic safety.

The currently 130 km-long Sighisoara-Brasov line is part of a global project aiming at upgrading the existing railway line from Brașov to the Hungarian border. Brasov–Apata, Apata–Cata, and Cata–Sighisoara are the three subsections of the line.

As with Lots 1 and 3 of the Sighisoara-Brasov line, for the upgrade of the catenary systems, Alstom will supply its OCS3 catenary solution for main lines.

The Rhine-Danube Corridor links the cities of Nuremberg-Prague-Vienna-Budapest-Curtici-Simeria-Brasov-Bucharest-Constanta. Through the rehabilitation programmes currently in implementation on the sections located on the Northern branch of the Romanian part of this Corridor, the traffic speed will increase to 160 km/h for passenger trains and to 120 km/h for freight trains.