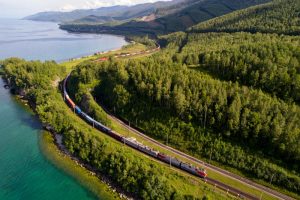 In May, the speed of container trains on Russian Railways network has increased to an average of 466.3 km per day which is 16.3% higher than the same period last year and compared to May 2018, the speed achieved a 28.4% increase.

The increased speed was recorded on the railway routes between China and Europe, via RZD network.

With a transport range of more than 2,600 km, the average speed of shipments increased to 619 km per day, which is 14% higher than in May 2019. The faster long-distance shipping was recorded due to transport routing, a reduction of losses during shunting operations, and the extension of warranty sections for the safe inspection of freight cars without inspections along the route.

In May, the average speed of container trains traveling between China and Europe on the Russian Railways infrastructure, particularly on the Kartaly–Krasnoye section was 1,231 km per day, which is 21.9% higher than the similar period last year.

Between January and May 2020, the average delivery speed of shipments on Russian Railways network amounted to 443.5 km a day, which is 8.6% more than the same period last year. At the same time, the reliability of delivery reached 99.7% which represents an increase compared to the first five months of 2019 when it was 98.5%.

Since the spread of coronavirus, Russian Railways with its subsidiaries increased the container transport services on Europe – China axis, via Russia.

In March, RZD Logistics together with UTLC ERA have launched a transport service of sanctioned goods from Netherlands to Xi’an, China. Also, in March a multimodal container service was launched from Scandinavia to China.