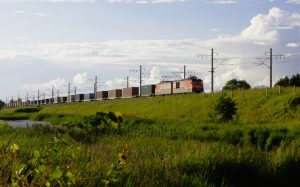 A regular multimodal container service between Scandinavia and China was launched by the UTLC ERA, in cooperation with German port of Mukran and Baltiisk port, in Kaliningrad region.

Using the CIM/SMGS unified invoice, the service offers a significant simplification on the logistics side and is reducing the travel time and transport costs. Previously, shippers from Scandinavia had to consolidate cargoes at major European terminals such as Hamburg or Duisburg and then dispatch their consignments further by land.

Under the project, the goods will arrive by ship at the Mukran port for further clearance and dispatch by multi-modal transport services through the port of Baltiisk and then crossing Lithuania, Belarus, Russia and Kazakhstan to its final destination in China. All these services are using the single CIM/SMGS invoice.

The CIM/SMGS transport document operates in accordance with the regulatory transport regimes in China, Kazakhstan, Russia, Belarus and Europe, thus obviating the need to reissue the invoice while the train is on route, and is also eliminating the possibility of errors when reissuing documents.

Consignments from the Swedish port will take about 15 days to reach their destinations in China, much faster than the 60 days it takes using sea transport. Freight trains will be weekly dispatched.