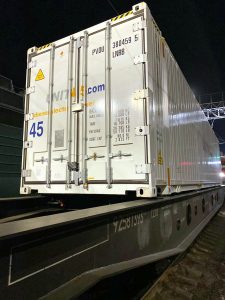 RZD Logistics and UTLC ERA have begun shipping sanctioned goods from Europe to China in transit through Russia using electronic navigation seals. The attachment of electronic seals are carried out in Smolensk, and the removal at Kartaly station.

The first cargo, carrying frozen salmon, was transported from the Netherlands to Duisburg on the «first mile», from where it was sent to China by rail on March 21 and on March 27, the train crossed the Russian border and proceeding as part of an accelerated container train to Xi’an, from where it will be trucked to Shanghai.

“The demand for foreign food is growing in China. This is largely due to an increase in consumption and purchasing power among the population of the China, and the emergence of a middle class in the country. Europe, as a shipper, is also interested in these shipments, our services open up new market opportunities for them to deliver their goods in the best possible safety and in a guaranteed time. Soon, we will also test the shipment of transit cargo along the Northern transit route through Zabaikalsk,” Dmitry Murev, General Director of RZD Logistics said.

This test shipment was implemented by RZD Logistics in close cooperation with the Federal Customs Service, Rostransnadzor, and reliable foreign partners and structures of RZD, including the FELB subsidiary.

The Xian – Duisburg train was operated by DBO Bahnoperator GmbH. The refrigerated container transport route passes through Belarus and Kazakhstan along one of the UTLC ERA base routes.

This new service launched by RZD will make better use of the country’s transit and logistics potential, increase traffic volumes and transit transparency.

The ability to transit sanctioned goods through Russia with the use of electronic navigation seals was established by a Presidential Decree issued in June 2019.

The sanctioned goods will be monitored using a transport tracking system that allows for collecting, processing, storing, and automatically transferring data about the location and safety of goods to regulatory agencies.