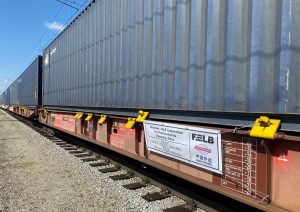 The container train service is carried out by RZD Logistics, FELB and Sinotrans.

RZD Logistics has launched a new container transport service from Shenyang in China to Enns in Austria, crossing through the Zabaykalsk border (Russia/China border).

The first train with industrial raw materials left China on March 14 and arrived at the destination station on April 1.

The project was implemented in close collaboration with Sinotrans, one of China’s largest logistics companies, and across China and Europe, the train was operated by FELB, a subsidiary of the subsidiary, and in the 1520mm gauge area, by RZD Logistics.

The second train, which will take the same route, is currently preparing to ship.

The project is carried out under a strategic cooperation agreement signed in 2019 by RZD Logistics and Sinotrans. It envisages the collaboration for the international railway freight transport, particularly sending of container trains to Europe from the Chinese provinces in which Sinotrans are represented. They include Qingdao, Changsha, Shilong, Shenyang and others.

“Expanding the geography of transport is one of our priorities for the development of the company in the container transit segment. That is our first transit service from Shenyang to Austria. We have long been working on traditional routes for the company from this province to Hamburg, Duisburg, Malaszewicze, Warsaw and Milan, so adding Enns to the list of delivery cities is a logical development of a successful service,” said Dmitry Murev, General Director of RZD Logistics.