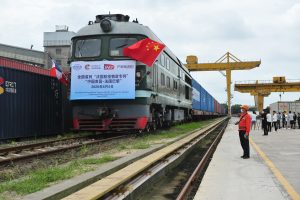 Russian Railways, SNCF Forwardis and Cosco Group collaborated to launch, on June 4, a new China-Europe train service, with Paris as the final destination. The first train has been sent from the eastern province of Jiangxi and within the next weeks, more trains are expected to follow.

The train made up of 41 forty-foot containers departed from Nanchang station, in the city of Nanchang, Jiangxi, transporting anti-epidemic supplies to Paris, including 40 million medical masks, equipment for hospital staff, gloves, water-soluble bags, contactless gel dispensers.

Nanchang station was selected as the starting point of the train service as it is situated in the proximity of the equipment suppliers, and has access to the main hub of Cosco Shipping Group.

On the broad-gauge railway network, the new train service is provided by UTLC ERA through Kazakhstan, Russia, and Belarus. The transshipment will be carried out at the Dostyk/Alashankou terminals located at the border between China and Kazakhstan and at Brest/Małaszewicze, at the border between Belarus and Poland. Shipping service in China will be carried out by Cosco and CRCT, China, on broad gauge rail by RZD Logistics, and SNCF Forwardis will transport goods by rail across the EU network.

The China-Paris railway route is being launched due to the need to ensure reliable supplies, primarily anti-epidemic medicines, which need to be delivered quickly and reliably.

The railway is a dependable connection between the East and West, not only reducing the delivery times, but cutting CO2 emissions. In addition, it is cheaper to deliver goods by rail than by plane, making them cheaper for consumers. One container train can deliver the equivalent of up to six planes of cargo, which ultimately increases the difference in transportation costs up to thirty times.

The new China-Europe train service covers a distance of 11,920 km within 20 days, crossing seven countries. At the end of the journey, part of the cargo entirely intended for hospitals and communities will be distributed in Ile-de-France, the rest being transported to the Auvergne-Rhône Alpes region.

The high-speed container rail link between China and Europe is carried out under an agreement signed by UTLC ERA and SNCF Forwardis which is focusing on railway transport development, providing customers with a stable, comprehensive, regular, and competitive service.