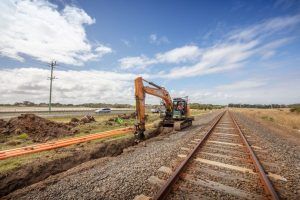 The joint venture which has engaged Nation Partners, Grimshaw and Deutsche Bahn as key partners, will deliver the services which cover technical and engineering, communications and community and stakeholder engagement.

The project, which is jointly funded by the Commonwealth and State governments with a total funding of AUD 4 billion (USD 2.97 billion) will reduce travel times between Geelong and Melbourne’s CBD to around 50 minutes. Under the project, the Werribee rail corridor has been selected as the route to deliver faster services for Geelong cutting average travel times for passengers by up to 15 minutes.

The Werribee route is the shortest and most direct rail path between Geelong and Melbourne, around 8 km shorter than the current route that travels through the western suburbs via Sunshine.

The first phase of the Geelong Fast Rail project will require the construction of new dedicated express track for regional services between Werribee and Laverton, the upgrade of bridges over main roads, the construction of new bridges and culverts over creeks and rivers, the upgrade of the signalling and train control system as well as the modernisation of Werribee and Laverton stations.

This project is just one part of a series of investments along the Geelong Line, to support the delivery of more frequent and reliable train services for Victoria’s fastest growing regional city.

The construction is expected to start in 2023 subject to relevant Victorian and federal planning, environmental and other government approvals.

The Victorian and Australian governments are also investing more than AUD 1 billion (USD 742.6 million) to upgrade the Geelong Line as part of the Regional Rail Revival programme, which is upgrading every regional passenger rail line and creating 3000 jobs and local supplier opportunities across the state. The upgrades of the Geelong Line include the Waurn Ponds station upgrade, the construction of an 8-km double track between South Geelong and Waurn Ponds and Waurn Ponds train maintenance and stabling facility.

The Geelong rail project, together with Ballarat, Bendigo and Gippsland lines will also be connected to the Melbourne Airport Rail line to deliver passengers increased transport links on an integrated rail regional network.