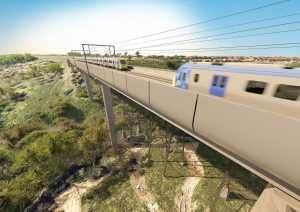 The Airport package includes the construction of the new Airport Station, where turn-up-and-go services every 10 minutes will benefit passengers travelling in either direction. This package comprises the delivery of the new station including operational control systems, a new 1.5 km double track from the new station to Mercer Drive, overhead wiring system and structures and other civil and infrastructure structures.

The new station will also accommodate the future construction of Suburban Rail Loop, which will ultimately connect Melbourne Airport with Broadmeadows in the north and beyond. Detailed discussions are continuing with key stakeholders, including the airport owners, to come up with the best design.
The viaduct package covers the construction of up to 6 km of elevated double track beginning with a rail bridge over the Western Ring Road (M80) from the Albion-Jacana corridor and continuing along Airport Drive.
The elevated design will minimise disruption for commuters and businesses in what is a busy industrial area.

The construction of the railway connection will start in 2022, subject to planning and environmental approvals.

The entire Melbourne Airport Rail project is divided into six major packages which include the Airport Station, the viaduct, the corridor construction, Maribyrnong River Bridge, Sunshine to Albion package and the rail systems package.

The Melbourne Airport Rail is a proposed rail transit service that will take passengers from Melbourne’s Tullamarine Airport to the CBD in less than 30 minutes, using Victoria’s new High Capacity Metro Trains.

When complete, people will be able to travel from the airport by train to Melbourne and regional Victoria. From 2029, trains will run from Melbourne Airport through to Sunshine Station, then into the Metro Tunnel and the heart of the CBD, before continuing on to the Cranbourne and Pakenham lines.

The Melbourne Airport Rail connection will also provide passengers access to the entire public transport network including trains on the Geelong, Ballarat, Bendigo and Gippsland lines with a single interchange.