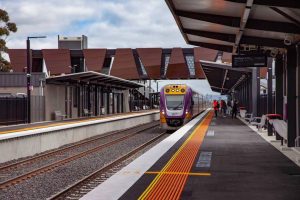 The Victorian Government announced that the upgrade of Ballarat Line is in the final phase of works and safety testing is underway.

During the final disruption for the project, between December and Januaruy, a crew of more than 250 will carry out work along the line, including signalling commissioning, critical safety testing and driver training.

At the same time, around 500 metres of track will be double tracked between Bacchus Marsh station and Maddingley and at two level crossings in Ballan, work which can only be completed at this critical point in the project.

Extra peak services and trains every 40 minutes in the off-peak will be introduced to the state’s second busiest regional rail line, with more details to be communicated to passengers and the community.

Once the commissioning is completed, all new infrastructure as part of the Ballarat Line upgrade project will be in operation, with trains to start using the new second platforms and tracks at Ballan, Bacchus Marsh and Wendouree stations, and the accessible pedestrian overpass at Wendouree station will be opened to station users.

In a boost to reliability for the growing communities along the line, passing loops at Ballan and Millbrook will be made operational, to help services recover faster from unexpected delays by providing more options for trains to pass each other on the line.

The upgrade of Ballarat Line is part of the investment of the Australian and Victorian governments under the Regional Rail Revival programme, which is upgrading every regional passenger rail line and creating jobs and local supplier opportunities across the state.

The construction contractor for the Ballarat Line modernisation and upgrade is a consortium made up of Lendlease, Coleman Rail and SMEC, in partnership with RPV and V/Line.