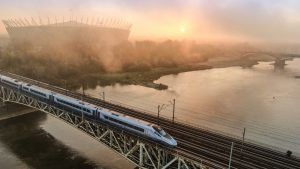 PKP PLK launched a tender on the elaboration of the planning study for the Warsaw Railway Junction as part of the Rail Master Plan of Warsaw Agglomeration. The selected contractor will have 3.5 years to prepare the study which will be submitted in 2025.

The study will assess the potential corridors to extend the rail infrastructure in the capital’s metropolitan area, which will include the construction of a new cross-city line. The contractor will also explore the needs of new stops and the expansion of the existing lines.

“The development of the transport network in Warsaw determines a new look at the possibilities of the Warsaw Railway Junction. I hope that the order for the preparation of a planning study on the extension of the railway system in the capital, with particular emphasis on the new cross-city line, will allow to identify potential corridors for the construction of new railway lines and stops in Warsaw,” Andrzej Bittel, the secretary of state at the Ministry of Infrastructure, said.

The study assumes the determination of variants of a new diameter line and other lines, preliminary technical analyses, model preparation and forecasts, as well as traffic demand and the preparation of conceptual systems.

“The implementation of the planning study will allow to determine the possibilities of rail expansion in Warsaw Railway Junction in the coming years. The document will enable optimal coordination of the development of railways and other means of communication in the capital,” Ireneusz Merchel, the CEO of PKP Polskie Linie Kolejowe said.

The conclusions of the planning study can be used for the pre-design and design documentation for individual investment tasks. The study is the first phase of the strategic planning and preparation for the development of the final feasibility study. The document allows for the long-term definition of strategic transport investments in the city and its metropolitan area.

In 2020, PKP PLK and a consortium of Idom signed a contract for a feasibility study on the development of additional tracks along the Warsaw-Mińsk Mazowiecki rail line, in Warsaw area. Part of the development of the rail system in Warsaw agglomeration, PLK launched in 2020 a tender covering the modernisation and expansion of the existing tracks to the Otwock city (southeast Warsaw).

The Rail Master Plan of Warsaw is a strategy covering the current situation of the transport system and the guidelines for future activities to create an integrated, fast and efficient rail system in the capital and it region over an area of 100 km.