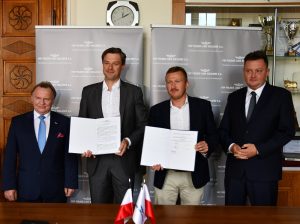 PKP Polish Railway Lines has signed a PLN 3 million (EUR 680,176) contract for a feasibility study for the construction of additional tracks on Warsaw-Mińsk Mazowiecki railway route, under the rail development in Warsaw agglomeration development plan.

The documentation will be prepared by a consortium comprising Idom Inżynieria, Architektura i Doradztwo (Poland) and Idom Consulting, Engineering, Architecture. The deadline for developing a feasibility study for the project is set for Q3 2022.

The planned investment will ensure, in particular, the possibility of introducing more trains and providing better journeys from the suburban districts to the capital. The commissioned feasibility study is the first step to investment after 2022.

“We are consistently increasing the capacity which involves the rail development in Warsaw agglomeration. Another example is the preparation of a better travel offer towards Sulejówek and Mińsk Mazowiecki. We want to provide the inhabitants of towns near Warsaw the possibility of attractive train journeys and guarantee the smooth running of long-distance trains. We also remember to prepare a better offer for freight carriers,”  Ireneusz Merchel, the CEO of PKP Polskie Linie Kolejowe said. 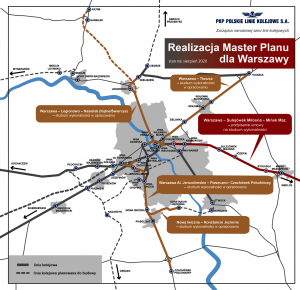 As part of the feasibility study, the contractor will perform a comprehensive analysis that will determine the technical possibilities and detailed solutions and the scope of necessary works, as well as the estimated investment costs.  The project proposes the construction of two railway junctions at Mińsk Mazowiecki station which will be analysed. Such a solution can improve the transport of goods from the Lublin region to the north of Mazovia. It will be possible for trains to travel from the Warszawa – Terespol railway line (No. 2) to the line northwards in the direction of Krusze and Tłuszcz (No. 13).

The study contractors will also analyse the possibility of building multi-level crossings and underpasses in order to increase the level of safety in rail and road traffic.

The feasibility study concerns the construction of additional electrified tracks on the 30 km section from the Warszawa Rembertów station to the Mińsk Mazowiecki station. The study is part of a project on the improvement of the capacity of the line No.2, on Warszawa Wschodnia – Mińsk Mazowiecki – Siedlce section.

An expansion to a four-track system is planned on the section Warszawa Rembertów – Sulejówek Miłosna. The extension to four tracks on the Sulejówek Miłosna – Mińsk Mazowiecki section will also be analysed in detail.
The project is expected to provide better train services and connections from Warsaw to the villages along the railway route Mińsk Mazowiecki, Sulejówek Miłosna or Dębe Wielkie, including the ones who travel towards Siedlce or Terespol. The authorities intend to increase the importance of the railway transport in the region while improving the connection with the cities on the route by introducing more connections with regular intervals from the region to the capital.

“Step by step, we are creating a better, safer and more efficient railway in agglomerations. The investments are translated into improvement of living conditions, including facilitating daily commuting to school and work. The expansion of the tracks from Warsaw towards Mińsk Mazowiecki, separating agglomeration from long-distance and freight railway traffic will increase the potential of railways as the most ecological transport,” Andrzej Bittel, the secretary of state at the Ministry of Infrastructure said.