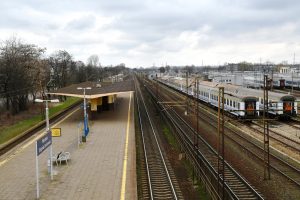 The project will include the modernisation of Warszawa Wschodnia – Warszawa Wawer section, the creation of a new stop at Warszawa Wiatraczna and a new transport node and additional crossings under the tracks. A new passenger information system will be installed. The platforms at the stations will be adapted to the passengers with limited mobility.

A new transport node will be created connecting the railway network with the public transport system. The underpass, lifts and stairs will provide access to the viaduct of on the Marsa Street, where the Warsaw Gocławek station is located. At all stations along the line new platforms will be built, while the existing ones with be modernised and new passenger information systems will be installed.

In addition, the railway line between Antoninów and Gocławek in Warsaw (Line No. 506)) will be transformed to serve the long-distance traffic

As part of the investment, installation of modern railway traffic control devices is envisaged.

“The National Railway Programme significantly increases the role of rail transport in agglomerations. The expansion of the agglomeration railway network means fewer cars in city centers and less air pollution. Thanks to projects such as the modernisation of the Warszawa Wschodnia – Warszawa Wawer route, travel is becoming more attractive and it will be easier to combine train journeys with public transport,” Andrzej Bittel, Secretary of State at the Ministry of Infrastructure, said.

The project is co-funded by the EU through the Operational Programme Infrastructure and Environment, Priority V, which includes the works covering the railway line no. 7 Warsaw – Dorohusk along the Otwock – Dęblin – Lublin section, second stage (Warszawa Wschodnia Osobowa – Warsaw Wawer).

It is expected that the works will be launched by the end of this year.

“We have announced a tender for construction and modernisation works on the Warszawa Wschodnia – Warszawa Wawer section. We know that in the current situation, the continuation of the National Railway Programme, announcing new tenders and signing contracts, is necessary to maintain stability on the construction market. These are key actions for the country’s economy which needs investment,” said Ireneusz Merchel the CEO of PKP PLK.