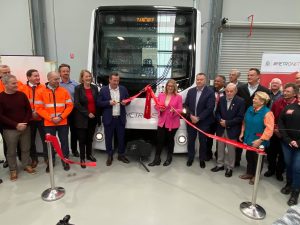 The Premier of Western Australia, Mark McGowan, and the Minister for Transport, Rita Saffioti, together with Alstom have inaugurated the commencement of operations at Bellevue train manufacturing facility, in Perth metropolitan area as part of Metronet project.

“With the opening of the Bellevue Metronet railcar facility, we have returned manufacturing to its home in Midland, after the original Midland Railway Workshops were closed by the then Liberal Government in 1994,” McGowan said.

The project will create around 200 Western Australian jobs including apprentices and aboriginal workers to manufacture, test, commission and maintain 41 6-car electri trains and 2 3-car diesel trains, which includes 20 years maintenance of the EMU trains and maintenance support services for the DMU trains.

246 Metronet railcars and six new Australind railcars will be built by more than 200 local workers.

The fleet of 43 trains will be built with the support of a thriving ecosystem of local suppliers, contractors, and equipment vendors. Alstom has committed to 50 per cent local content for the vehicles, bringing additional flow on benefits beyond the delivery of the trains to the Western Australia economy.

The project will see the transfer of the latest railway technologies and manufacturing processes to Western Australia, establishing one of the most technologically advanced train manufacturing and maintenance sites in Australia. Alstom will provide fast-tracked training and skills development programmes through dedicated partnerships with local TAFE and training organisations, creating a new generation of skilled railway manufacturing professionals.

The new C-Series trains will be more energy efficient and designed to accommodate future upgrades. Each train will have a capacity of approximately 1200 passengers and include three double passenger doors per car for enhanced passenger flows.

Already onsite is the first railcar body, which has had its coupling mechanism installed, and been rolled on to the first assembly station where it will have its windows, insulation, flooring, doors, interior ceiling and wiring, crash box and electrical cabinets fitted.

The new trains will be maintained at PTA’s Nowergup depot and will utilise Alstom’s innovative HealthHub predictive maintenance tools that will optimise the performance and reliability of the trains throughout their lifecycle.