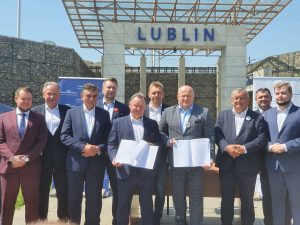 The document will allow both side to modernise and expand the railway connection within Lublin region.

“As railway is the most environmentally friendly mode of transport, the government makes efforts to develop the infrastructure across the country. We are currently building an agglomeration railway in Szczecin and Rzeszów. I hope that Lublin will soon join these cities. The establishment of the Lublin agglomeration railway is a chance to reduce road traffic in the center of Lublin,” said the Minister of Infrastructure, Andrzej Adamczyk.

As part of the project, an area will be developed that will cover Lublin rail agglomeration providing fast and efficient access between the capital of the province and the region’s cities such as Puławy, Parczew, Chełm and Kraśnik.

The development concept will analyse the construction of the railway lines from Szastarki, through Janów Lubelski to Biłgoraj and from Lublin to Łęczna. The electrification of the Lublin – Łuków section will also be considered, as well as the construction of a new connection to the Lublin Airport from Chełm (south-east of Lublin), which will guarantee better integration of rail and air transport. 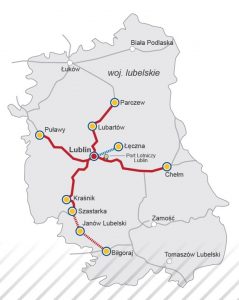 Under the development project, the existing infrastructure will be modernised and new rail connections and stops will be constructed. The platforms will be adapted to the needs of people with limited mobility. Next to stops, it will be possible to create interchanges, offering a high level of integration between the railway transport and the public transport system.

The design concept is expected to be developed in 202-2021, with half of the cost being covered by the Lublin Voivodeship, and the remainder will be provided by PKP PLK, which will also launch the design tender and will supervise its preparation.

The document concept will enable the development of a feasibility study that will specify the detailed scope of work.

The implementation of the construction works will be carried out during the 2021-2027 financial framework.

As part of the railway development programme, Poland is developing new rail agglomeration projects to provide increased access to railway services between the main cities and their metropolitan areas.

In April, PKP PLK has launched the tender to modernise Warsaw rail agglomeration and in November 2019 the company announced the development of a study for Poznań Railway Junction.