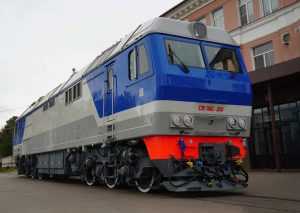 TMH has shipped two diesel locomotives for passenger and freight rail transport to Demirýollary, Turkmenistan’s railway operator, as part of the contracts signed in October and November 2020.

The new diesel locomotives will be delivered to the Ashkhabad locomotive depot.

This is the first shipment of freight and passenger diesel locomotives to Turkmenistan since the establishment of TMH.

Class TEP70BS, manufactured by TMH at the plant in Kolomna, is designed to haul passenger trains on 1520-gauge rail main lines. Its latest modification features a two-line power supply, making it compatible with modern passenger cars, including double-deckers. Their power rating amounts to 2942 kWt (4000 hp) per locomotive section. Their control system allows operation of two locomotives by one crew as a multiple. 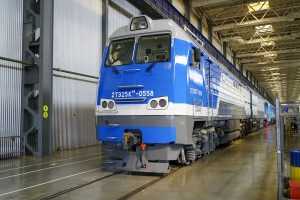 The modular locomotive, designed for multiple-unit operation is highly efficient in terms of operation, maintenance and repair. The locomotive is able to run at speeds of up to 160 km/h. These vehicles are equipped with microprocessor-based control, monitoring and diagnostics system, and with combined system of automatic adjustment of the heat-carrier temperature. The new control desk has improved ergonomics and parameters displaying function and delivers improved working environment for the locomotive crew and train attendants including the HVAC system. Class TEP70BS transport passengers on main lines of Russia, Latvia, Belarus, and Uzbekistan.

Class 2TE25KM, produced by TMH at the plant in Bryansk, is a mainline freight 2-section diesel locomotive with an electric transmission. It can haul trains of up to 6400 tonnes and has a proven record of reliable operation in various climatic condition. Class 2TE25KM are widely used in rail transport in Russia and Mongolia, operated by Ulaanbaatar Railway, as well as at industrial sites of Russia, Kazakhstan, and Uzbekistan.