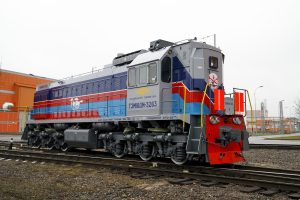 For Mongolia, the two shunting locomotives were equipped with KVARTZ-M2 audio and video recording system. Bryansk Machine – Building Plant is also responsible for the organisation of training courses for the locomotive maintenance personnel and operator crews.

During the Covid-19 world pandemic, 87 railway specialists from Mongolia finished their coursework and passed the necessary exams online.

TEM18DM locomotives are manufactured since 2008. They are in demand at rail networks as well as at closed industrial yards. Their sales geography and use case portfolio constantly grow.

In 2019, TMH received a certificate for batch production of new modification of TEM18DM locomotive. Its base model can now be supplemented by four additional systems in various combinations to better suit the customer’s needs. A customer can now choose from a total of six modifications of TEM18DM vehicle. One of the available modification allows the operation on the 1435mm-gauge railway network.

The new modifications will widen the area of application and increase work efficiency. To reduce fuel consumption, most modifications will include a start-stop system, which is crucial during winter months. The system manages the machine’s operation mode and thermal utilities without driver’s involvement. It will shut down or launch a machine’s engine automatically, triggered by critically low or high temperatures.
Dehumidification unit for compressed air and electro-pneumatic lines will allow passenger train operation.