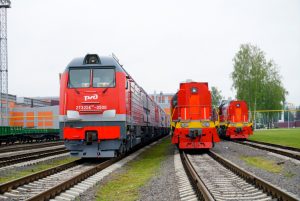 The new locomotives were sent to Kuibyshev and Gorky railways starting 2020.

This type of locomotives is energy efficient and is able to run trains weighing up to 6.4 thousand tonnes. The use of diesel locomotives of this series makes it possible to increase the average weight of trains and increase the volume of cargo transport while reducing operating costs. Particular attention is paid to ensuring the safety and comfortable working conditions of the locomotive crew. The two-section diesel locomotives are designed to run at a maximum speed of 100km/h. 90% of components used in the locomotive design are of domestic production.

The 2TE25KM diesel freight locomotives successfully operate on the network of Russian Railways.

They are supplied to Russian Railways under life-cycle contracts, the manufacturer being responsible for the technical condition of the vehicle during the entire period of its operation. In this regard, warranty centres for servicing locomotives were created in the depot of registration of new diesel locomotives of BMZ.

These locomotives are also operated by Russian BaltTransService company, and are used on the Ulan Bator railway network in Mongolia, at Tugnuisky coal mine in Buryatia, Russia, Shubarkol mine and the Sokolovsko-Sarbaisky mining and processing company in Kazakhstan and the Navoi mining and metallurgical plant in Uzbekistan.

In total, the Bryansk Engineering Plant has produced more than 500 diesel locomotives of this series.

In June, BMZ has started production of 3TE25K2M high-capacity three-section main freight diesel locomotives for Russian Railways. By the end of the year, it is planned to send 40 new locomotives to the Komsomolsk-on-Amur locomotive depot of the Far Eastern Railway.