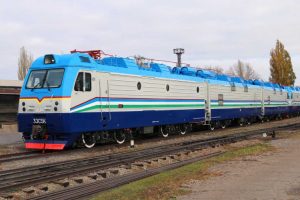 Uzbekistan Railways and Transmashholding signed a contract for the supply of five 3ES5K freight electric locomotives which will be manufactured at Novocherkassk Electric Locomotive Plant (NEVZ) in Rostov region. The locomotives are expected to be delivered by the end of this year.

In 2019, the representatives of Transmashholding presented Uzbekistan Railways the possibility of operation of 3ES5K electric locomotives which must meet country’s conditions which require technical characteristics and temperature regimes.  During the meeting, important attention was paid to electrification and the switching to electric traction possibility which is increasing the reliability of the locomotive fleet.

The main advantages of the 3ES5K locomotives with by-axis traction are tolerance to volatile landscapes, such as the ones typical of Uzbekistan Railways, higher weight norms for freight hauling, and improved performance.

The independent excitation of traction motors in traction mode, on speeds of 0 to 50 km\h, provides added resistance to slippage. Such locomotives are widely used by Russian Railways in Siberia and Far East with extra-heavy loads.

Uzbekistan Railways’ locomotive fleet operates VL60K and VL80S produced by NEVZ in the 1980s. In the post-Soviet years, shipments of NEVZ products to Uzbekistan ceased. In 2007-2012, TMH built for Uzbekistan 10 passenger diesel locomotives TEP70BS at the Kolomna plant.