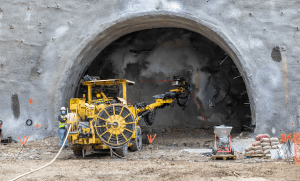 2TDK, the company responsible for the Divača–Koper second track project, has launched the tunnelling works for the first two of seven tunnels of the new line.

The tunnelling works started for the 1,154 metre-long T7 tunnel in the area above the Osapska valley, in the Črni Kal, and for the 3,808 metre-long T8 in Dekani, in the Koper region.

The Divača–Koper rail project covers the construction of a 27.1 km line of the second track between Divača and Koper, and because the difficult terrain and environmental constraints, 75% of the route will be constructed in tunnels. Two viaducts, two bridges and one gallery of 45 metres will be also constructed as part of the new railway line.

The seven tunnels have a total length of 20.5 km, of which T1 will be the longest, with a length of 6,714 metres., for which temporary tunnel portals have been prepared.
In May, the construction works for the project were inaugurated in Dekani by the Slovenia’s Ministry of Infrastructure, 2TDK and the CPG consortium.

The line will be constructed into two main sections. For the Divača-Črni Kal section, 2TDK signed a EUR 403.6 million contract and the Črni Kal – Koper rail section, EUR 224.75 million was the value of the contract.

The total investment of the Divača–Koper rail project was estimated at EUR 1.2 billion, of which EIB provided EUR 250 million, and EUR 153 million was allotted by the European Union, through the Connecting Europe Facility (CEF). In May 2020, a EUR 112.5 million credit contract was signed with NLB Bank and it is expected that up to EUR 417 million funding will come from loans provided by the IFIs and commercial banks.

EUR 522 million are expected to be covered by the government of Slovenia through capital repaid in annual instalments. The capital source is largely secured from the highway mark-up collected by the Slovenia’s Motorway Company (DARS), mostly from foreign road transport companies. In December 2020, DARS received EUR 135 million, while the remaining EUR 387 million is to be paid by 2026, when the construction of the line is expected to be completed.