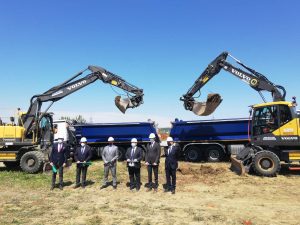 Pavle Hevka, the general manager of 2TDK the company responsible for the Divača-Koper second track project, the representatives of CPG consortium and the Slovenian Minister of Infrastructure, Jernej Vrtovec, have launched on May 5, 2021, the construction works for Slovenia’s most important rail project. The official ceremony work took place in Dekani, in the City Municipality of Koper following the signing of the contracts for main construction works.

In total, 29 bidders submitted their offers for the project, of which 15 bids for the Divača – Črni Kal section and 14 for the Črni Kal – Koper section.

At the end of April, the Supervisory Board of 2TDK approved a EUR 1.8 million contract for investment oversight with a Mind Inzeniring-lead consortium comprising seven companies. 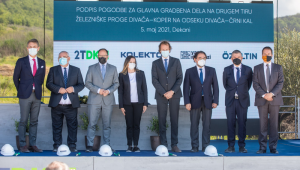 At the same time, the company approved a EUR 13.9 million contract for technical supervision for the entire project with a consortium formed by Irgo Consulting, Elea iC, Geotočka, Dibit (Austria) and the Geological Survey of Slovenia (GeoZS).

EUR 1.2 billion is the total value of the project, of which EUR 153.36 million is the European financing through the CEF, while the EIB provided EUR 250 million.
Divača-Koper second track is expected to enter operation in 2025 when freight trains will run at 120 km/h and passenger trains, at 160 km/h.

231 trains per day will travel along the new line and it is expected that the capacity will reach 43.4 million tonnes per year.