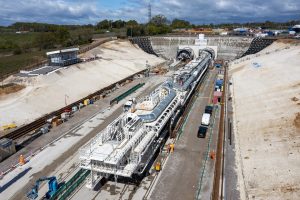 The TBM Florence, the first of 10 Tunnel Boring Machines (TBMs), has been launched, as part of the HS2 Phase One, that will dig 103 km (64 miles) of tunnel for the Britain’s new high-speed railway.

“The tunnels these machines dig will ensure the benefits of our new high-capacity, high-speed railway run to the great cities of the North and Midlands, forging stronger connections in our country, boosting connectivity and skills opportunities, and transforming our transport links,” Transport Secretary Grant Shapps said.

The first TBM will dig 16 km (10 miles) of tunnel under the Chilterns.

170-metre-long 2,000-tonne TBM Florence is the largest ever used on a UK rail project and will start digging from HS2’s South Portal site next to the M25 in Buckinghamshire. A second machine ‘Cecilia’ will launch next month to excavate the second tunnel at the South Portal site.

“The launch of our first tunnelling machine is a major moment of progress for the HS2 project as we work to deliver a high-speed railway that will offer low-carbon alternatives for long distance journeys across the UK,” HS2 Ltd Chief Executive Mark Thurston said. 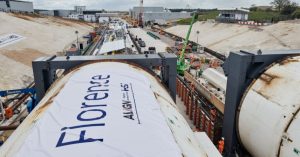 Designed specifically for the mix of chalk and flints under the Chilterns, the two identical TBMs will dig separate tunnels for north and southbound trains.

A crew of 17 people will operate each TBM, working in shifts to keep the machines running 24/7. They will be supported by over 100 people on the surface, managing the logistics and maintaining the smooth progress of the tunnelling operation.

Each machine operates as a self-contained underground factory digging the tunnel, lining it with concrete wall segments and grouting them into place at a speed of around 15 meters a day. Each tunnel will require 56,000 precision engineered, fibre-reinforced segments which will all be made on site.

Align is recruiting 1,200 personnel in total, including 100 apprentices, to work on the Central 1 Area of HS2 Phase One that it is delivering.