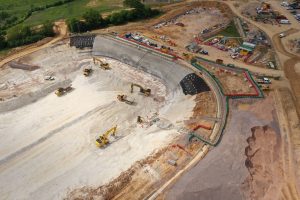 The formal start of HS2 construction has started on September 4, 2020 following the Government’s approval for Notice to Proceed in April to the four main works civil contractors (MWCCs) working on the project to commence full detailed design and construction of Phase One of the HS2 railway on the London – West Midlands route.

The symbolic announcement signals that the MWCCs are moving from enabling works, scheme design and preparatory work, to full construction of the new railway line.

“As the spine of our country’s transport network, the project will be vital in boosting connectivity between our towns and cities,” Prime Minister Boris Johnson said.

The move to HS2 construction also heralded a ‘jobs boom’ on the project.

HS2’s main works contractor for the West Midlands, the Balfour Beatty Vinci joint venture, along with its supply chain partners, has said it expects to be one of the biggest recruiters in the West Midlands over the next two years, with up to 7,000 skilled jobs required to complete its section of the HS2 route. The EKFB joint venture comprising Eiffage, Kier, BAM Nuttall and Ferrovial will recruit over 4,000 roles in the next two years. The JV will build the section from the Long Itchington Wood site in Warwickshire south to the Chiltern tunnel portals.

Skanska Costain Strabag JV has confirmed that it will create an estimated 4,800 jobs, Align JV expects to recruit 1,200 vacancies, with over 100 opportunities for apprentices. BBVS will employ a workforce of approximately 1,400 to support the construction of Old Oak Common Station. As well as providing over 250 apprenticeship positions, the joint venture is committed to attracting local candidates, of all ages and backgrounds.

Mace Dragados JV, who this month moved onto the construction site adjacent to Euston station, forecasts that it will need 3,000 workers to help deliver the capital’s new central high speed station.

HS2 Ltd is already directly recruiting for 500 new roles over the next three months, with the majority based in Birmingham, as the project moves into the construction phase.

Jobs, including apprenticeships, are beginning to be released on HS2’s construction partners’ websites and will also be promoted through employment partnerships with local authorities and specialist employment support agencies.

The launching of the construction works “marks a major milestone in this government’s ambitions to build back better from Covid-19. Shovels in the ground to deliver this new railway means thousands of jobs building the future of our country’s infrastructure,” Transport Secretary Grant Shapps said.