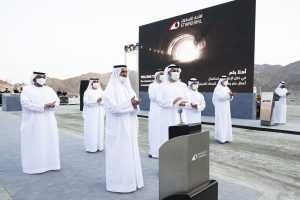 Etihad Rail has completed the excavation of rail tunnels part of Package D of the Stage Two of the UAE national rail network, which also includes 54 bridges and 20 animal crossings.

The company celebrated the excavation of all nine tunnels with a total length of 6.9 km across the Emirates of Fujairah and Ras Al Khaimah, two months ahead of schedule, and according to the highest standards of safety and sustainability.

The works for the rail tunnels recorded one million working hours and was supervised and carried out by more than 600 experts, specialists, and workers using the latest tunnelling machinery and modern technologies.

In July, Etihad Rail has completed the longest tunnel in the Gulf Region. Running for 1.8 km, the tunnel is part of Package D on Stage Two.

In 2019, Etihad Rail signed a AED 4.6 billion (USD 1.25 billion) contract with a consortium of China Railway Construction Corporation (CRCC) and National Projects and Construction (NPC) for the construction of Package D.

The contract covers the construction of a railway line of 132 km running from Sharjah to Fujairah, providing connectivity to the Port of Fujairah in continuation of Stage Two Package C from the Dubai border with Sharjah. This route will pass through the Emirates of Sharjah, Fujairah and Ras al-Khaimah. The majority of the alignment will pass through the Hajar Mountains.

Etihad Rail has recently announced the completion of the construction works for Package A of the Stage Two,  a 139 km rail line connecting Ruwais with Ghuweifat on the UAE border with Saudi Arabia. The line connects Ghuwaifat with Stage One of the project, which extends over 264 km from Habshan to Ruwais. The contract for Package A was awarded to a consortium comprising China State Construction Engineering Corporation and South Korea’s SK Engineering and Construction.

The UAE rail network is being constructed on schedule. Track laying commenced at Saih Shuaib, the rail head for track running toward Abu Dhabi and Dubai as part of Stage Two. The overall track on Stage Two will run from Ghuweifat on the border of Saudi Arabia to the emirate of Fujairah on the UAE’s eastern seaboard. At the beginning of 2021, track laying began in the Al Dhafra region toward the UAE’s border with Saudi Arabia.