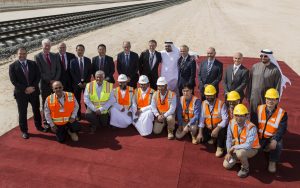 Etihad Rail has launched the construction works of Package A as part of the second stage of the railway network, a 139-km railway line from Ghuweifat on the UAE border with Saudi Arabia to Ruwais, where it connects the first stage of the network.

“As 2020, the year of preparing for the next 50 years, begins, we launch the construction works for this pivotal national project that will generate a paradigm shift in the country’s transport sector, consolidating the UAE’s position at both regional and global levels,” said Sheikh Theyab bin Mohamed bin Zayed Al Nahyan, the Chairman of Etihad Rail.

For the construction of the Ghuweifat – Ruwais railway line, 700,000 cubic metres of ballast, 30 million tonnes of earthwork will be used. Etihad Rail’s own manufacturing plant will deliver 450,000 of concrete sleepers. USD 408.45 million (AED 1.5 billion) is the value of the contract signed in March with a consortium comprising China State Construction Engineering Corporation and South Korea’s SK Engineering and Construction.

After the ceremony, Etihad Rail and a joint venture of Larson and Toubro Limited and Power China International signed a AED 1.87 billion (USD 509.2 million) contract to construct the freight facilities for the railway network. Under the contract, the JV will be responsible for the surveying, design, construction, equipment installation, testing and pre-commissioning of each facility. The freight facilities will be constructed in Ruwais, Industrial City of Abu Dhabi, Khalifa Port, Dubai Industrial City, Jebel Ali Port, Al Ghayl and Siji, Fujairah Port and Khorfakkan Port and will be capable of undertaking all loading and unloading operations, in addition to providing container storage and maintenance.

The planned port facilities will provide a full service to Etihad Rail customers, including direct access to trains on the dock, easing container movements between ships and trains. The facilities, will become UAE’s main rail transit system for local, regional and international distribution and logistics, with bonded storage and customs on-site.

This was the last contract for the second stage of the UAE’s 1,200-km railway network which will connect Fujairah and Khorfakkan on the country’s east coast to the Saudi border at Ghuweifat.