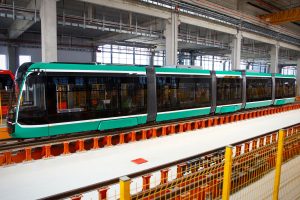 Bozankaya has successfully completed the tram tests at its Sincan plant, in Ankara, where the officials of the Municipality of Iasi, Romania, recently attended.

The low-floor unidirectional trams have five doors and are adapted to the passengers with reduced mobility, providing five spaces.

The tram has 30 single seats made of glass fibre reinforced plastic, embedded paint, anti-graffiti and anti-vandalism properties, with wear-resistant upholstery and dirt.

In November 2019, Bozankaya, the first rail vehicle exporter of Turkey, and the Iasi city authorities signed a RON 140.8 million (EUR 28.48 million) contract for the delivery of 16 five-section new trams.

Under the contract, Bozankaya will have to deliver the tram fleet in 34 months. The new trams for Iasi are 30 metre-long with 5 sections and are designed to operate at a maximum speed of 70 km/h. They have a total capacity of 270 passengers providing great convenience in passenger boarding and boarding thanks to their 100% low-floor design.

In addition, the city of Iasi is also acquiring 16 Swing trams from Pesa Bydgoszcz under a EUR 33.1 million contract signed in April 2020.

On September 9, the Iasi Mayor, Mihai Chirica, inaugurated the first six low-floor vehicles acquired by the city in the last 40 years. “It is a historic moment for our city. These are the first new trams to arrive in Iasi after 1977. This was a promise I have made for the citizens, and we are entering a new stage of the public transport: green, modern, smart! We are committed to modernise the public transport system, to create a cleaner city with reduced green gas (GHG) emissions,” the Mayor said.

The tram delivered by Pesa are 30 metre-long with a total capacity of 240 passengers with 60 seats. They are equipped with air conditioning system, interior and exterior video monitoring system as well as a modern passenger information system. The procurement is co-financed by the European Commission through the Regional Operational Programme (ROP).

To modernise its urban transport, the city is also acquiring 44 electric buses.

The public transport company of Iasi will have a fleet of electric vehicles comprising 76 units with a RON 462 million (EUR 93.45 million) investment.