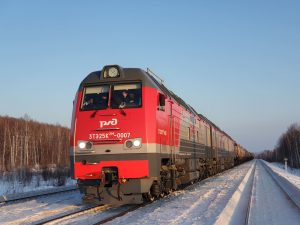 Transmashholding held an official ceremony at its Komsomolsk-on-Amur depot to launch three new Class 3TE25K2M three-section mainline freight diesel locomotives. At the depot, a centre of warranty service and technical support has been created for the locomotives.

In total, TMH will deliver Russian Railways 12 such locomotives which are available in two, three, and four-section configurations. Locomotive’s design incorporates innovative equipment and components to maximize the technical and economic efficiency. It has increased adhesive weight, service intervals, being able to carry high  volumes of fuel and sand.

The first prototype was assembled in 2017, with trials being completed in October 2019.

The diesel locomotive with an AC\DC electric drive and bi-axis power control is designed for heavyweight freight operations in the harsh conditions of East-Siberian and Far East regions.

The 1,520-gauge locomotive has a nominal power of 9,300 kWt or 12 648 hp. Its engine has a power reserve for low temperature and high-altitude operations and it is equipped with a microprocessor control system.

The 3TE25K2M locomotive can haul freight trains of up to 7,100 tonnes and it is expected that East-Siberian and Far-East railway subsidiaries will increase their train-handling capacity by 20% on the route between Taksimo and Sovetskaya Gavan Sortirovochnaya port terminals.