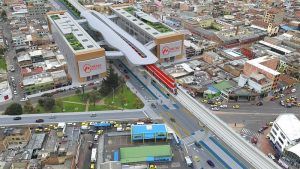 The Systra – Ingetec consortium has been selected for Bogotá metro Line 1 extension, after contributing to the development and construction of the lines 1 and 2.

Under the contract awarded by Financiera de Desarollo Nacional (FDN) the elaboration of the technical feasibility of the extension is expected to be completed by September 2022.

The consortium will analyse different alternative routes, propose all the studies for the railway systems for the viaducts and stations, then update the technical specifications and support the client during the negotiation phase with the concessionaire for Line 1. This will culminate in a single commissioning of this line in 2028, phase 1 and extension in one go.

The extension covers the construction of a line with a 3 km viaduct served by with 2 or 3 stations and it is expected to be completed in 2028 when will have a capacity for 60,000 passengers per hour and per direction.

The extension of Bogotá metro Line 1 comprises of the construction of a bypass line running from the south-east to the north and will continue its elevated route by taking advantage of city’s urban nature, and in particular the city’s major road arteries.

The entire Line 1 will be 24 km-long with 16 stations, 10 of which will provide transport connection to the BRT system (TransMilenio). A USD 4.3 billion contract was signed with Apca Transmimetro consortium comprising China Harbor Engineering Company and Xi’An Metro Company. The contract covers the design, construction, operation and maintenance services for a period od 28 years. The line will run between Portal de Las Americas station and the station of Avenida Caracas, and also includes a 4.5 km technical section to the yards and workshops.

PLMB will include 16 stations, of which ten will be integrated with the BRT stations of the TransMilenio network. The average distance between each station is expected to be 1.39km.

In 2021, FDN awarded a Systra-led consortium for the design of Line 2 which is expected to be completed in 2023.