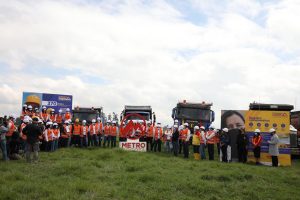 The Mayor of Bogotá, Claudia López and the general manager of the Bogotá Metro, Leonidas Narváez, inaugurated the construction works for Patio Taller maintenance facility of the Line 1 situated in Bosa, southwest of Bogotá.

“We are starting the construction works of Patio Taller, the workshop of the first metro line of the city. It is constructed on the El Corzo property on more than 32 hectares where the future metro trains will be maintained,” Claudia López said.

“The Patio Taller maintenance facility is the heart of the Metro Line 1. It will have a capacity for 30 trains but it is designed to be developed and to accommodate 60 trains from 2028 to 2048,” Leonidas Narváez explained.

The works also include the construction of a rail section allowing trains to enter the workshop area, the installation of rail systems and cranes, the construction the train washing facility, the area fitted with maintenance and repair equipment for the trains. In addition, there will be 79,500 m2 of administrative and support buildings.

The works to develop and adapt the Patio Taller facility will be completed in August 2027.

The works are part of the preliminary phase of the concession contract signed between Bogotá Metro and the concessionaire Metro Línea 1 for the construction of the first metro line. The construction works started simultaneously on August 17 at three sites across the area. The Apca Transmimetro consortium comprising China Harbour Engineering Company (85%) and XI AN Rail Transport Group Company (15%) which created the Metro Línea 1 concession company, won the contract for the Bogota Metro First Line Project (PLMB) with a length of 24 km and 16 stations. The contract includes the investment, financing, design, construction, supply, commissioning, operation and maintenance of the line and has a value of USD 3.6 billion.

The construction of the first line will cut the travel times by 50% and improve the mobility while will support the productivity and will provide job opportunities. The construction works will create more than 17,000 direct jobs and thousands of indirect jobs.

Bogotá is committed to transform the transport system through the development of the public transport system. Recently, the design contract was awarded to a Systra-led consortium for the second line of the city.