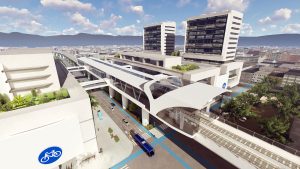 The Financiera de Desarrollo Nacional of Colombia (FDN) awarded a Systra-led consortium a contract to design the Bogotá metro Line 2. The design contract is expected to be completed in 2023 when the tender will be issued for the construction works.

The Line 2 will provide connection with the Line 1, in the north-east of the capital. The stations will be interconnected with the TransMilenio Bus Rapid Transit (BRT) network and the RegioTram del Norte tram-train line, for which Systra is also in charge of design.

The Bogotá metro Line 2 will be 15.8 km-long of which 13.5 km will be an underground section, 1.9 km will be ground-level constructed and 400 metres will be an elevated section. The project includes the construction of 11 stations and one maintenance centre near the Fontanar del Río park, and will be designed to run with unattended train operation (UTO) system. The new metro line will cross the cities of Chapinero, Barrios Unidos, Engativá and Suba, in the capital’s metropolitan area. The project is estimated at USD 3.6 billion.

In June, the pre-feasibility phase of Bogotá metro Line 2 has been completed.

When completed, the new metro line will be used by 45,000 passengers per hour per direction.

Systra has also prepared the technical structuring and studies for the Line 1 which is currently under construction. This USD 5.2 billion project covers the construction of a 24 km line with 16 stations, which is expected to carry up to 72,000 passengers per hour per direction.

With more than 8.3 million inhabitants, Bogotá is pushing ahead with the implementation of its metro Line 2, with the selection of the Integral Structuring Consultant last month.