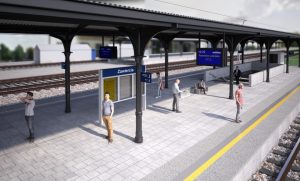 Poland’s rail infrastructure manager, PKP PLK, and TPF sp. z o.o. signed a contract to supervise the development of executive projects and the execution of works of Katowice Airport rail connection. PLN 9 million (EUR 2 million) is the value of the contract.

“The signed supervision contract should ensure efficient implementation of the project which combines the means of transport and enables access by rail to the Katowice Airport. We increase accessibility to railways. It is also a boost for the economic development of the region. We use EU funds to implement the project,” Andrzej Bittel, the secretary of state at the Ministry of Infrastructure said.

TPF will supervise the investment process including the technical supervision over the performed works, will consider the appropriate quality of performance, taking into account the financial settlements of the European Union, which co-finances the project.

The contract is part of the “Revitalization and reconstruction of the partially closed railway line No. 182 Tarnowskie Góry – Zawiercie” project funded through the Operational Program Infrastructure and Environment. PLN 660 million (EUR 146.2 million) is the value of the project for which the construction works are expected to start in the second quarter of 2023.

The project covers the reconstruction of a 30 km line between Tarnowskie Góry and Siewierz and the revitalisation and electrification of 48 km line. The project includes 59 engineering structures, the construction of two-level intersections, and the modernization of 38 rail-road crossings.

The project also involves the construction of four train stops, the modernisation of the existing stations which will benefit facilities for passengers with reduced mobility, sound and monitoring system, signage and information systems. The platforms at the stations will be modernised.

The contract for the construction of Katowice Airport rail link was signed in 2020 with a consortium of Track Tec Construction.

From Zawiercie, the passengers will reach to the Katowice Airport in 23 minutes Tarnowskie Góry in less than 20 minutes. For passengers from Katowice and Częstochowa, the journey will take about an hour. Thanks to the investment, travel opportunities and access to railways in the region will increase. The transport connection between the airport and the cities of the Silesian Voivodeship will improve, as well as the efficiency of the agglomeration railway and the transport of goods by rail transport.