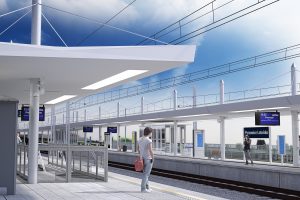 The contract was signed with a consortium of Track Tec Construction (the leader), Infrakol and Przedsiębiorstwo Budownictwa Inżynieryjnego i Kolejowego (PBIiK).

“The investment carried out under the National Railway Programme combines the means of communication and enables access by rail to the Katowice Airport. We increase accessibility to railways. It is also a stimulus for the economic development of the region. We use EU funds to implement the project,” Andrzej Bittel, the secretary of state at the Ministry of Infrastructure said.

The project includes the reconstruction of a 30-km closed section between Tarnowskie Góry and Siewierz and the electrification of 48 km of the railway line. An additional track is to be laid on line 182 between Pyrzowice airport and Mierzewice Zawierciańskie. The investment also involves 52 engineering structures, the construction of two-level intersections, including with the A1 motorway and the voivodeship road DW 913 Będzin – Pyrzowice, the access road to the airport. It will be safer thanks to the modernisation of 38 level crossings.

Two railway viaducts, one road flyover and five railway bridges are to be restored, while two viaducts are to be built.  and one underpass is to be modernised and a further two built.

The pedestrians will use the new underground passages at Pyrzowice, the Airport and Siewierz town. To facilitate the acces of the passengers with reduced mobility, elevators will be installed at Zawiercie, Pyrzowice and Tarnowskie Góry stations.

The comfort and safety during travel will be ensured by the sound system and monitoring system which will be installed, as well as clear signage and information boards.

The passenger trains will be able to run at speeds of up to 140 km/h. The passengers travelling from Zawiercie will reach the airport within 23 minutes and from Tarnowskie Góry, in less than 20 minutes. For passengers from Katowice and Częstochowa, the journey will take less than an hour. Thanks to the Katowice Airport rail link project, the travel opportunities and access to railway services in the region will increase. The transport connection of the airport in Pyrzowice with the cities of the Silesian Voivodeship and the efficiency of the agglomeration railway will be improved.

“Thanks to the implementation of the project, the access to railways in the region will increase. The communication between the airport in Pyrzowice and the cities of the Silesian Voivodeship, the efficiency of the agglomeration railway, and long-distance connections will be significantly improved,” Ireneusz Merchel, the CEO of PKP Polskie Linie Kolejowe said.

The project has received a PLN 500 million (EUR 109.36 million) EU financing through the Infrastructure and Environment Operational Programme under the “Revitalisation and reconstruction of the partially closed railway line No. 182 Tarnowskie Góry – Zawiercie”.