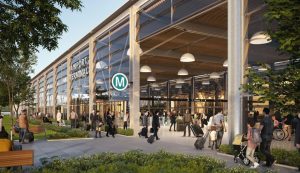 The Government of New South Wales has shortlisted three consortia for the tunnelling works of Western Sydney Metro line connecting the city with the Western Sydney International Airport.

John Holland, Gamuda and Acciona Australia are also participating at the Sydney Metro West project being shortlisted in different consortia (with other companies).

The winner will deliver 10 km of twin metro tunnels and the associated excavations of station boxes. The station box and tunnelling contract is expected to be awarded by the end of this year, with the first of four mega tunnel boring machines expected to be in the ground by the middle of 2023.

The six stations are proposed to be built along the alignment including two stations at Western Sydney International airport, one at the Western Sydney Aerotropolis and one at St Marys, from where the customers will be able to connect to the existing Sydney Trains suburban T1 Western Line. Proposed stations at Orchard Hills and Luddenham will service a future mixed-use precinct and an education and innovation precinct.

The travel time between St Marys station and the Aerotropolis station is expected at around 20 minutes.

The new line will link the residential areas with job hubs including the new Aerotropolis and connect passengers from the new airport to the rest of Sydney’s public transport system.

New metro rail will become the transport spine for Greater Western Sydney, connecting communities and travellers with the new Western Sydney International (Nancy-Bird Walton) Airport and the growing region. The city-shaping project, from St Marys through to the new airport and the Western Sydney Aerotropolis, will provide a major economic stimulus for the region Sydney, creating more than 14,000 jobs during construction for the New South Wales and national economies.