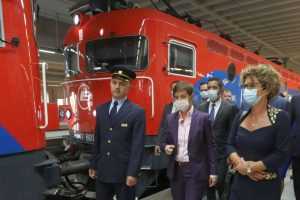 Serbia’s Prime Minister Ana Brnabic announced that the government will invest EUR 6 billion to modernise the rail infrastructure to get connected with all countries in the region and the EU by rail.

The statement was made at the Connecting Europe Express train’s arrival at the Belgrade Centre – Prokop railway station. The event coincided with the Western Balkans 2021 Rail Summit held on September 13, in Belgrade.

The Prime Minister said that Serbia has invested more than EUR 600 million in 2014, when serious investments in the country’s rail infrastructure began, along with the train procurement.

In January 2020, the President of Serbia Aleksandar Vučić has announced that EUR 3.53 billion will be invested to modernise the railway system and includes a EUR 1.7 funding for the Belgrade metro project. The commitment is part of Serbia 2025 Strategy under which EUR 9 billion will be invested in the next five years for the modernisation and development country’s transport sector.

In addition, in 2020, the Ministry of Transport has announced that is preparing new projects to build and reconstruct 520 km of rail lines worth EUR 1.9 billion. There are also plans to reconstruct 850 km lines across the country, but at a later stage.

The country is currently implementing important projects to build a modern rail infrastructure. An important connection towards the European Union’s rail network covers the construction of the  Belgrade-Budapest corridor for which the Belgrade-Novi Sad section is expected to be soon completed and at the beginning of 2022, the dynamic tests are scheduled to be launched.