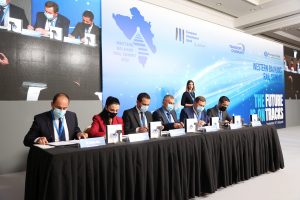 The transport ministers of Western Balkan States signed the Dedication to Rail declaration which recognises the important role of a connected and digital rail network for the region’s development.
The document was signed at the Western Balkans Rail Summit held in Belgrade and organised by the Transport Community Permanent Secretariat, the European Investment Bank (EIB) and the European Bank for Reconstruction and Development (EBRD), and under the auspices of the Serbian Ministry of Construction, Transport and Infrastructure.
The summit also gathered the ministers in charge of transport from neighboring countries, representatives of the European Commission rail professionals.

The Dedication to Rail proposes the restore of direct express train connections between major cities to establish better connectivity and provide safer and environmentally sustainable mode of transport for people and businesses in the Western Balkans.

Thus, the authorities committed to a number of priorities including the re-establishment of the direct intercity train links connecting the region and the EU, enhancing digitalisation of the railway systems to interconnect and exchange data for cross border passenger and freight transport, increasing safety of level crossings, as well as opening of the rail markets.

The investment to develop and reform the rail transport in the region “can be done by focusing simultaneously on two tracks – adopting standards and building and improving infrastructure,” Matej Zakonjsek, Director of Transport Community Permanent Secretariat said.

As one of the major multilateral investors in the Western Balkans, the EBRD has issued an appeal for more investment in the region’s railway sector to address the climate change emergency and improve connectivity. “Rail not only plays a critical role in any well-balanced transport system, it is the lynchpin for a sustainable transport approach and has a key role to play in addressing today’s climate emergency,” Nandita Parshad, EBRD Managing Director, Sustainable Infrastructure Group, said.

To date, the EBRD has invested almost EUR 1 billion in Western Balkans’ railway sector and is committed to accelerate the investment in this transport mode.

The transport sector of the Western Balkans region also benefits EIB support which is committed to “accelerate the modernisation of railway in line with EU standards. Smarter, safer and digitalised rail across the region will help us address the environmental issues and enable shift to more sustainable transport,” Lilyana Pavlova EIB Vice-President responsible for the Western Balkans said during the summit. EIB has provided EUR 5 billion financial support for the transport sector in the region.

The summit was organised to coincide with the arrival of the Connecting Europe Express train that arrived in Belgrade on September 12.