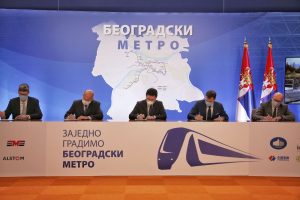 The Serbian Minister of Finance, Siniša Mali, and the authorities of the City of Belgrade signed a Memorandum of Understanding for Belgrade first metro line. The agreement was signed with Power Construction Corporation of China, Alstom and Egis Rail.

The MoU was signed with the director of Belgrade Metro, Stankom Kantarom, the vice president of Alstom, Philippe Delleur, and the CEO of Egis Rail, Olivier Bouvard.

At the end of 2020, Serbia and France signed an interstate agreement for the construction of infrastructure projects. EUR 581 million is the value of the agreement, of which EUR 127 million are to be allotted for the improvement of the electricity distribution network while EUR 454 million will be invested for the construction of the first metro line.

Under the agreement, Alstom will be responsible for a wide scope of works covering the delivery of the metro trains, the digital train control systems, platform screen doors, the infrastructure including the track laying and the power supply solutions, as well as the transport system integration.

The construction of the new metro network is expected to start at the end of this year, after the contract will be signed with all the relevant Serbian authorities. 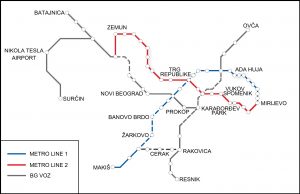 The first two lines will cover a total of around 42 km. The Belgrade first metro line will be 22 km-long running along the Sava river, crossing the Belgrade city centre, linking the Makisko Polje area in south part of the city, to the Mirijevo urban neighbourhood in the north-east.

The second line will have a length of 22 km and will connect the Zemun railway station crossing the New Belgrade urban municipality. It will have with an interchange with the first line, in Mirijevo.

“We are immensely proud that Alstom’s solutions will be part of the construction of the Belgrade metro, which is a very important infrastructure project in the Balkan region, Antonio Moreno, Central and Eastern Europe Managing Director at Alstom, said.

In July 2020, the Deputy Mayor of Belgrade, Goran Vesic signed with Egis Group the contract for the feasibility study which is expected to be presented by the end of 2021.

In October 2020, the Ministry of Transport meet Filip Delur, the vice president of Alstom, and the Ambassador of France to Serbia, Jean-Louis Falconi discussed on the construction of the metro network in Belgrade.

According to the authorities, the metro network would have 60 km with 60 stations. EUR 6 billion is the estimated value of the project, of which EUR 4 billion is the needed investment for the construction of the first two metro lines. last year, the President of Serbia, Aleksandar Vučić, announced that EUR 1.7 billion will be provided for the construction of city’s metro system, under the 2025 railway strategy.