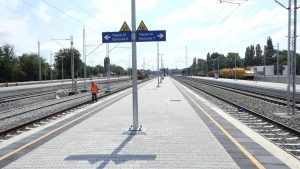 Serbia is expecting to soon complete the modernisation works on the Belgrade-Novi Sad railway as part of the future corridor to Budapest, Tomislav Momirovic, the Minister of Transport said during a visit to Zemun railway station, which is situated on Belgrade – Stara Pazova line.

The project entered mecanisation and electrical works, performed at this station as well as at the six existing stations along the railway line linking Belgrade and Novi Sad.

To implement the project, the traffic has been suspended on a track since April and soon will be reopened to complete the works on the other tracks. The project is divided into two sections. The first one covers the two-track line from Belgrade to Batajnica which now accommodate the rail traffic at low speeds. The works on this section are 95 per cent completed and the final works are being performed to soon open the traffic along the rail section. The station buildings are operational, and they are about 70 per cent completed. Along this section, four large overpasses are constructed and are expected to become operational.

The other section covers the railway line from Batajnica to Stara Pazova which benefits four tracks, of which two tracks will accommodate speeds of 200 km/h.

The minister said that the works on the Belgrade-Novi Sad railway will be completed according to the schedule and track and drive static and dynamic tests are expected to start in February 2022.

The modernisation project is part of the railway corridor linking Serbia and Hungary, which is a continuation of China’s Belt and Road Initiative (BRI). In Serbia, the corridor will be 184 km-long and the value of the works are estimated at USD 2 billion.

The construction is currently ongoing along a 34.5 km rail section from Belgrade to Stara Pazova, performed by China and on a 40.4 km line from Stara Pazova to Novi Sad, which is build by Russian Railways.

The entire project includes the reconstruction and modernisation of the Belgrade – Novi Sad – Subotica – Hungarian Border (Kelebija) – Budapest which has a value of USD 426.37 million. Based on the commercial agreement between Serbia and Chinese Export-Import Bank USD 367.44 million is the total value of the Belgrade – Stara Pazova project, of which USD 297.6 million is the loan agreement, covering 85% of the proiect’s value.

In June, the Transport Ministry and a consortium comprising Russian Railways have signed a contract for the modernisation of the Subotica – Szeged rail section which is providing the connection to Hungary.