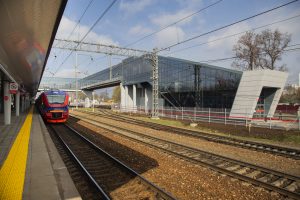 Sergey Sobyanin, the Mayor of Moscow has officially opened a new modern terminal at Vnukovo station situated in the suburbs of Moscow.

The reconstruction of the suburban station changed the station status into a city terminal. The project covered the total demolition of the building and the facilities, excluding the rail tracks which were modernised.

In 2020, four stations were opened as part of the Moscow Central Diametre 4 line and this year the authorities plan to open two more stations and renovate six more, two of which will have interchanges to metro stations.

The development of the diameter Line 4 (MCD-4) is continuing, new stations are under construction, and the Kokoshkino station is ready by 75 % where two platforms with a canopy are already completed. Finishing works are carried out, it is left to install elevators and escalators. Shops, residential areas, restaurants will be opened next to the new modern terminal making this place attractive for living and business.

The MCD-4 is a link between the Moscow suburbs, the city centre and the Moscow region. The line will be 86-km-long and will include 37 stations. It will give passengers an opportunity to build more convenient and time-wise routes. The perspective MCD-4 will connect seven Moscow stations and will create 18 interchanges to metro and 2 to the MCC.

It is estimated that about 30 million people will use the new line which is twice population of Paris, London and Berlin.