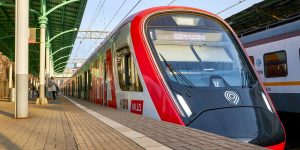 66 million passengers have used the transport services on Moscow Central Diameters lines since their opening in November 2019.

According to the Head of the Department of Transport, Maxim Liksutov, ‘passengers use was on an upward trajectory after the diameters opened, until the lockdown, which indicates their high popularity. On 6 March, the routes carried 568,000 passengers, an all-time high. This is 15 percent more than the same period in 2019 prior to the MCDs.’

The two MCDs had positive impact on the capital’s transport system as ‘they have reduced road congestion, and the number of metro passengers has decreased by 12 percent,’ Liksutov said.

The MCD-1 is running from Odintsovo to Lobnya on a 52 km-long line served by 28 stations with 12 transfers to the metro system, Moscow Central Circle and Moscow Railway. City’s plans for 2020 include an extension of the line by four new stations. The 80 km MCD-2 is running from Nakhabino to Podolsk. 38 stations serve the line, of which 15 are interchange stations providing transport links to the metro system, MCC and railway radial routes. The Moscow City announced that this will be extended by three more stations providing increased access to urban rail transport services.

In addition, this year six stations on the MCD-1 route, and two on the MCD-2 route will be upgraded from commuter service platforms. Two stations on the MCD-2 (Shchukinskaya and Pechatniki stations) will form major transit hubs providing direct access to metro transport services. Both lines now have 58 stations and the number of stations will reach 66 by 2024, of which 27 will be interchange stations.

The expansion project envisages the construction of modern passageways and ticket offices, lifts and escalators. New platforms, pedestrian over and underpasses will be constructed at the existing stations to increase the traffic flow and attract more passengers.

‘First, we will open the Slavyansky Bulvar station on the MCD-1 route. Passengers using this convenient station will change to the Slavyansky Bulvar station on the Arbatsko-Pokrovskaya Line through warm corridors. People in the Fili-Davydkovo District will get a railway station and will be able to change to Aeroexpress trains there,’ Liksutov added.

The Moscow Central Diameters are operated by 39 seven-car Ivolga (Oriole) trainsets manufactured by Transmashholding. In the first month, MCD trains were expanded from six or seven to 11 carriages meeting the passengers’ increased demand. In addition, the MCD-1 is also used by Aeroexpress trains and on the MCD-2, Lastochka trains are also operating.

The Central Suburban Passenger Company old fleet using the two RER-style routes will be replaced by new trains within one year. These routes will get 469 new carriages by the end of the year. By introducing the new trains, equipped with modern heating, ventilation and air conditioning (HVAC) systems, the capacity on the line will increase by 15%.