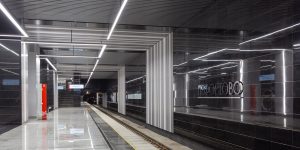 The workers are now completing the line’s tunnels and the stations’ structures.The new stations are situated on the western, southwestern and southern sections of the line. In addition, by the end of the year, tunnel boring will be finished, and the circle will finally be completed in 2022.

The line will connect the existing and future radial lines of the Moscow Metro 10 km away from the Circle Line, which will help redistribute the traffic from the stations in the city centre.

Last year, 7 new metro stations opened for passenger traffic, including Yugo-Vostochnaya, Okskaya, Stakhanovskaya and Nizhegorodskaya on the Nekrasovskaya Line, and Aviamotornaya, Lefortovo and Elektrozavodskaya on the Big Circle Line, which are operating as part of the Nekrasovskaya Line for now. Almost 5.5 million passengers used the new stations since their opening. “We will continue building the metro as fast as before so that Muscovites can travel to work and back home faster,” Sobyanin said.

In addition, the City administration has plans to open six new metro stations in Troitsky and Novomoskovsky administrative areas in the next two years. The region benefits 8 stations. Construction work is now underway to complete the Troitskaya Line with the Slavyansky Mir, Mamyri, Bachyurinskaya, and Kommunarka stations.

It will be possible to connect with the Big Circle Line from the Ulitsa Novatorov station, and people will be able to change for the Sokolnicheskaya Line using a large transit link/hub, due to be developed at the Kommunarka station.

“We are also building the Pykhtino station on the Kalininsko-Solntsevskaya Line and preparing to launch the construction of the Novomoskovskaya station on the Sokolnicheskaya Line,” Rafik Zagrutdinov, Head of Moscow’s Department of Construction said.

The Troitskaya Line will link the MCC’s Krymskaya station with Troitsk. It will pass through districts with a population of over one million, plus several hundred thousand workers and students from other areas.

The 40-kilometre-long Troitskaya Line will have 16 stations. The construction for this line were launched in 2018 and groundbreaking operations are underway on the main sector with the Sevastopolsky Prospekt and Ulitsa Novatorov stations.