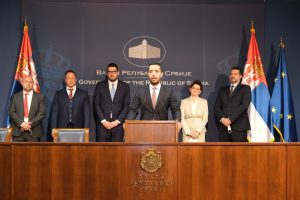 The Serbian Minister of Transport, Tomislav Momirovic, the acting director of Serbian Railway Infrastructure, Nebojsa Shurlan, and the consortium of Karin Komerc MD and RZD International signed the contract for the modernisation and reconstruction of Subotica – Szeged railway connection.

The contract covers the reconstruction of a 26.6 km rail line as well as the reconstruction of three station buildings (Palić, Bački Vinogradi and Horgoš stations) and two stops (Javno Skladište and Hajdukovo stops). 13 level crossings and 2 pedestrian underpasses will be also reconstructed along the line. Among the artificial structures there is an overpass and 10 culverts.

EUR 87.18 million (RSD 10.2 billion) is the value of the contract excluding VAT signed with the Serbian – Russian consortium which will be responsible for all the construction works along the Horgos – Subotica – State Border with Hungary, including the deployment of signalling and communication systems, electrical equipment, power supply systems and engineering structure.

Under the contract, the works are expected to be completed within 14 months and before commissioning, the facilities will undergo pre-launch tests.

“The reconstruction and commissioning of this route will improve transport and passenger connections in the region of the two cities of Subotica and Szeged, strengthen the links between Hungary and Serbia, but most importantly, we will connect the main logistics sites of the region, including the intermodal port of Baja [one of the main transport nodes in Hungary], on the Danube River, the river port of Szeged on the Tysa river and logistics centres in Vojvodina and Belgrade”, the Minister Momirović said.

The Horgos – Subotica line was last renovated over 20 years ago. Currently, only a few sections are in operation along the line. The new railway will be electrified and designed for the movement of freight and passenger trains. In the near future, the development of a detailed project for the modernisation and construction of the railway line will begin.

After the completion of Subotica – Szeged railway project the trains will run at speeds of up to 120 km/h.

On June 3, during a meeting with Hungarian Minister of Foreign Affairs Peter Szijjarto, the Serbian Prime Minister Ana Brnabic emphasized that the “railway between Subotica and Szeged which is expected to be completed next year, has been declared a project of special importance for Serbia and a key project of the two countries.”

The rail section is part of the main railway line linking Belgrade, Stara Pazova, Novi Sad, Subotica towards the border with Hungary, which includes the construction works of the longest railway viaduct and Cortanovci tunnel performed by RZD International.