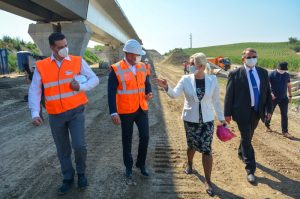 Modernisation works are carried out on different rail sections on the Belgrade-Budapest railway line with Belgrade – Novi Sad expected to be completed in the autumn of 2021, when travel time between the two cities will take less than 30 minutes.

In addition, next year, the rehabilitation works for Novi Sad – Subotica section, the third section of Belgrade-Budapest railway are scheduled to start in 2021. “I expect that in the first half of next year, we will start the construction of the third section from Novi Sad to Subotica, and that works on the reconstruction of regional railways will be performed at the same time,” Serbian Transport Minister  Zorana Mihajlovic said.

At the same time, RZD International is carrying out construction works on the Stara Pazova – Novi Sad section where a 500m-viaduct is being built near the Beska station. Under the project, this station will be also reconstructed until 2021. It includes the construction of 2 comfortable waiting rooms, ticket offices, service rooms and sanitary facilities and it will be adapted to the passengers with disabilities.

On the 40 km Stara Pazova – Novi Sad section part of the Belgrade-Budapest line, the Russian company is currently constructing and modernising a double-track railway for a speed of up to 200 km/h, building a 3-kilometer viaduct in the floodplain of the Danube River which also includes the Cortanovci tunnel. In total, 28 facilities will be built on the site including galleries, overpasses, pedestrian crossings, viaducts and bridges. The construction works on 12 of them has already been completed. The construction of the Injia, Sremski Karlovci, Petrovaradin stations, the Beshka – Sremski Karlovci, Petrovaradin – Novi Sad routes is underway.

According to Serbian modernisation plan, the modernisation of Belgrade – Nis railway section is also expected to start in 2021 and scheduled for completion in 2025.

EUR 2 billion are to be invested for the modernisation of the railway connection between Belgrade, Nis and Presevo. After project’s completion, the trains will be able to run at 200 km/h on Belgrade – Nis line, and 160 km/h on the Nis – Presevo railway link. “Serbia is a transit country, and with the completion of the railway Corridor 10, we will become an unavoidable route because we are 300 kilometers shorter than Corridor 4, which passes through Romania and Bulgaria. Corridor 10 means connecting the region with South and rest of Europe and works on the construction of the high-speed railway from Belgrade to Nis will begin next year,” Mihajlovic explained on the occasion of a technical visit to a construction site part of Belgrade-Budapest railway project.

The new railway corridor linking Serbia and Hungary will have a total length of 350 km, of which 184 km in Serbia.