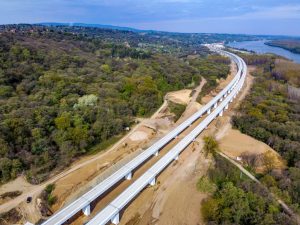 RZD International has completed the construction of the longest railway viaduct in Serbia, including the Cortanovci tunnel in the Danube river floodplain, more than six months ahead of schedule. These engineering facilities will become part of the first in Serbia high-speed railway section Stara Pazova – Novi Sad of the Belgrade – Budapest line.

Before putting the facilities into operation, scheduled for the end of 2021, works on the arrangement of the catenary system, track laying, as well as pre-launch tests will be carried out in fall 2021.

“We are convinced that we are building not only the railway infrastructure, but also shaping a new image of Serbia – a modern country with the latest high-speed technologies, making full use of its geographical position at the heart of Europe”, Sergey Stolyarov, the Director General of RZD International said.

The viaduct construction works began in November 2017. Its length reaches 3 km, and the height of individual pillars is 26 meters, which is comparable to the height of an 8-storey building. The viaduct is located at the exit from the Cortanovci tunnel in front of the town of Sremski Karlovci in the floodplain of the Danube River. Part of the structure is on the slope, therefore, to ensure the reliability of the facility during its construction and operation, 20 landslide protection structures were constructed. 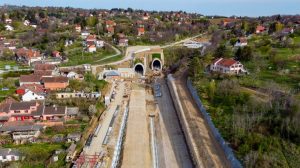 The Cortanovci tunnel consists of two parallel bores with a total length of 2.2 km. Its construction was carried out in a continuous mode since September 2017 and was completed seven months earlier than the contract terms. The construction of the tunnel itself took 3 years. The tunneling was carried out simultaneously from four points of the two bores of northern and southern portals. Now the track is being laid in the tunnel.

During the construction advanced Russian and international technologies were used, which were tested during the construction of Olympic facilities in Sochi. Supervisory authorities, accredited laboratories and independent consultants constantly monitored the quality and progress of the work. The period of safe operation of the facilities established by the project will be at least 100 years. 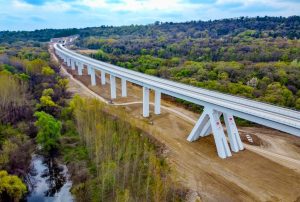 RZD International continues works on the construction and modernisation of the railway on the Stara Pazova – Novi Sad section of the Belgrade – Budapest line part of the Trans-European Transport Corridor X. After the completion of all works on the project, passenger trains will be able to reach speed of up to 200 km/h on this section, and freight trains with up to 130 km/h.