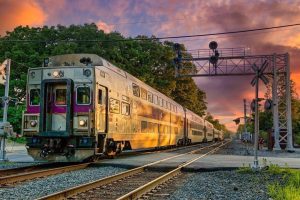 Under the contract, the joint venture will the New Bedford line, upgrade the Middleborough Secondary Line, and build the Phase 1 of signalling and communication system.

The MBTA has obtained all required permits to begin construction, which is expected to take 37 months and begin this fall. This is the second and larger of two major construction packages of South Coast Rail Phase 1 which is expected to be completed in 2023. It will connect southeastern Massachusetts and Boston, providing riders with a 1-seat trip from Taunton, Fall River, and New Bedford to Boston in less than 90 minutes.

The contract includes construction works for 38.5 km of tracks, 12 interlockings, 11 culverts and additional systems and infrastructure. The project includes the installation of new rail, ballast, and sub ballast, raising the track in some locations and installing ballast vibration mitigation. Retaining walls will be constructed as required. The first phase of the project involves the construction of six stations

SCR Constructors will build two new commuter rail stations in New Bedford, with one on the north end on Church Street and one in the downtown, as well as stations in East Taunton and Middleborough. The new stations will feature accessible high-level side platforms, a drop-off area, and bicycle parking.

All stations include designated accessible parking including for electric vehicles, with a total capacity of 1570 spaces. The station on Church Street in New Bedford will include 355 parking spaces with 352 at the New Bedford station adjacent to Route 18, which will also feature a pedestrian bridge connection to downtown as part of a future construction contract. The East Taunton station includes a high-level, center-island platform and 363 parking spaces. The new Middleborough Station will be opposite the Route 495 ramp for easy access and will include 500 parking spaces.

The contract package also includes a layover facility for train storage in New Bedford at Whale’s Tooth, adjacent to an existing rail storage area. It will have 6 tracks where trains will be stored before beginning service daily and after ending service. The secure site will also have an 1,800-square-foot crew building and parking areas for employees.

The South Coast railway project will restore commuter rail service between Boston and southeastern Massachusetts by the end of 2023. Taunton, Fall River and New Bedford are the only major cities within 80 km of Boston that do not currently have commuter rail access to Boston. South Coast Rail will reconnect this region to jobs and generate economic development.