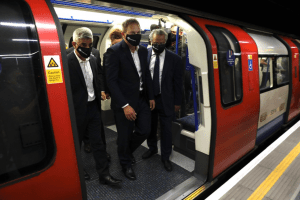 The Mayor of London, Sadiq Khan, the Secretary of State for Transport, Grant Shapps and London’s Transport Commissioner, Andy Byford, together with other officials, have opened the 3 km Northern Line extension, served by Nine Elms and Battersea Power Tube stations.

“After years of hard work, I’m delighted that we’re able to open the Northern Line extension and it was great to have the chance to travel on one of the first trains between Nine Elms and Battersea Power Station. This extension will hugely improve the links between these vibrant, growing south London neighbourhoods and the rest of the capital,” Sadiq Khan said.

The major construction on the 3 km twin-tunnel railway between Kennington and Battersea Power station, via Nine Elms, began in 2015. Despite the challenges of the pandemic, the construction project stayed on track for an autumn opening.

The Northern Line extension is the first major Tube extension this century and is supporting around 25,000 new jobs and more than 20,000 new homes. In addition, construction of the extension boosted the UK economy and supported around 1,000 jobs, including 79 apprenticeships.

Both new stations, which have been constructed primarily from stone, concrete, stainless steel and glass, use double-height ceilings to create large airy spaces.

The new Tube station at Nine Elms has a very visible presence on Wandsworth Road, serving developments including the US Embassy and the re-developed New Covent Garden Market, as well as existing communities. The station has been designed so that 479 new much-needed rental homes, 40 per cent of which will be affordable, can be delivered above and around it. 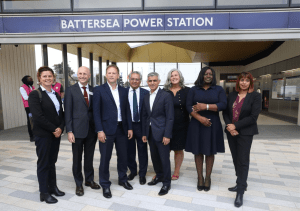 The new station at Battersea, which sits in the shadow of Gilbert Scott’s Power Station and includes a gold-painted geometric roof with a giant skylight, opens onto Battersea Park Road and will hold a prominent position within Prospect Park when this new community space opens next year. Art on the Underground’s major new permanent artwork by London-based Brazilian artist Alexandre da Cunha – titled ‘Sunset, Sunrise, Sunset’ – stretches to a total of over 150m in length inside the ticket hall of the new station, which at 2,225m², could fit 80 electric double decker buses side-by-side.

Transport for London (TfL) has delivered the Northern Line extension GBP 160 million (EUR 186.55 million) under budget, bringing its estimated final total cost to GBP 1.1 billion (EUR 1.28 billion), despite the cost pressures brought about by the pandemic. The spending authority budget was increased to GBP 1.26 billion (EUR 1.47 billion) in January 2016, but TfL has managed through strong collaboration with suppliers to ensure the project provides value for money.

The opening of the extension comes ahead of the Elizabeth line which will be launched in 2022.