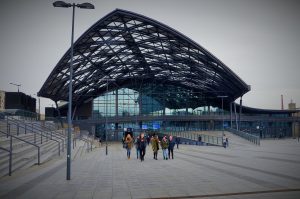 The railway infrastructure manager of Poland, PKP PLK, has applied to the Łódź Regional Director for Environmental Protection for a transfer decision on environmental conditions for the construction of a cross–city tunnel in the city. The tunnel is part of the construction of a high – speed connection under the Solidarity Transport Hub (STH) project which will be implemented by Centralny Port Komunikacyjny (CPK).

“The transfer of rights and obligations resulting from the decision on environmental conditions will allow CPK to significantly accelerate the preparation and implementation of the key investment of the Solidarity Transport Hub for the construction of a section of a new railway line No. 85 in Łódź crossing the tunnel. The new railway line will lead long–distance trains from Łódź towards Poznań and Wrocław,” Ireneusz Merchel, the President of the Management Board of PKP Polish Railway Lines said.

The joint actions of both companies are possible because on March 4, 2021, PKP Polskie Linie Kolejowe signed with Centralny Port Komunikacyjny a cooperation agreement on the preparation and construction of the high – speed rail tunnel in Łódź. The aim of the cooperation is to support PKP Polish Railway Lines’ investment for the construction of the hub using its technical, economic, and environmental resources and to effectively manage the investment processes of the two companies.

PKP is currently continuing an investment in Łódź consisting the construction of a 3 km cross–city tunnel from the Fabryczna station to the city’s Kaliska/Żabieniec station, along with two new stops (Srodmiescie and Polesie). The construction of the tunnel together with the two stops are implemented under a project which involves the construction of a railway section from Łódź Fabryczna station crossing the Łódź Kaliska station to the lines No. 14, 15 and 25.  The project will provide more rail travel options for long-distance, regional and metropolitan rail connections. The investment is co-financed by the Operational Programme Infrastructure and Environment (OPI & E).

The tunnel is an essential element of the STH under which a transport hub between Warsaw and Łódź agglomerations is planned to be built. It will integrate the air, rail and road transport. On railway component, the project will be based on 1,800 km of new high-speed rail lines and 2,400 km of modernised rail network. The fully interoperable system, which is designed for speeds of up to 350 km/h with an operational speed of 250 km/h, is expected to be gradually opened from 2027.